Vietnam National Puppetry Theatre – the largest hub of puppetry arts of Vietnam with the function of preserving and developing traditional theatrical arts. The Theatre has a long history of 60 years of development and has a number of leading puppetry researchers, authors, directors, visual artists, fine art decorators, and puppet performers of the country. It has 5 People’s Artists, 25 Artists of Merit and many other outstanding young artists.

At present, the Theatre has three stages for performance: one for stage puppet shows and two for water puppet shows (an indoor and an outdoor pool Pagoda stage). In addition, traveling puppet shows are offered on contract domestically and internationally. The Theatre’s art programs are often updated and renewed to match the development pace of the society. In recent years, the Theatre has successfully experimented some shows with new format, combining traditional and contemporary and stage and water puppet plays to be more attractive to the audience. A number of art works such as Hồn quê (The Country Soul), Anderson Fairy Tale, The Mysterious Dream of Tễu and Kangaroo, White Space, and Da Trach Love Story etc. have brought a new face to traditional water puppetry. Many experimental stage puppet shows and programs, very novel and attractive, have resonated and won high awards and prizes at domestic and international festivals. They included Stories of To he, The Soul and Vigor of Thang Long, Ugly Duck, Children’s Moon, Country Rhythm, Aladin and the Magic Lamp, Sun Wukong defeats White Essence, Xuy Van pretends to be mad, and Witches fear Ghost etc.

Over the last 60 years, generations of puppet artists from the Vietnam National Puppetry Theatre have brought Uncle Tễu and other funny characters from Vietnam’s rice fields to offer successful puppet shows across all continents. Vietnamese puppeteers have performed in 60 countries worldwide including Japan, France, Italy, Portugal, Spain, Hungary, Norway, Myanmar, Brunei, the Philippines, Turkey, Poland, Slovakia, Chile, Thailand, China, Korea, Australia, the Czech Republic, and Mexico. With funny, attractive and unique puppet plays, the puppeteers have really won the heart of foreign audiences rendering water puppetry from Vietnam unique in the world. In the process of international integration, puppetry art has been developed to catch up with the breath of the time through creation and breakthrough experiments. A number of changes has been made to the Theatre’s art programs such as adapting foreign plays to traditional water puppet shows, renewing puppet plastic arts, expanding spaces for puppet stage performance, combining different puppet genres in a program, finding active support from choreography, music  and light effect etc., thus surprising both domestic and international and audiences.

In the past, international audiences only knew about Vietnam’s traditional water puppetry. Yet, in recent years, the Theatre has brought stage puppet shows to their traveling performance trips overseas, and they have been accepted and loved by foreign audiences. Not being satisfied with the achievements left by their ancestors, generations of puppet artists, particularly young puppet performers from the Vietnam National Puppetry Theatre have in recent years confirmed their talent and further developed the Theatre to be worthy of its national art brand name and a leading puppet theatre of the country’s puppet industry with programs and shows diverse in format and genres of both stage and water puppetry.

The puppet shows of the Theatre are rich in content and new in format, delivering profound human culture messages. Many audiences, after watching the shows give this comment: “After watching Vietnamese puppet shows, we find Vietnam in our heart”. During their traveling performance overseas, Vietnam National Puppetry Theatre has brought Vietnam’s unique art, full of national cultural identity to friends from all continents, contributing to enhancing mutual understanding and cooperation between Vietnam and other countries. In each overseas performance trip, the Theatre has a chance to promote Vietnam’s image and its puppetry art has received countless praises. Continuous overseas performance contracts and invitations show that Vietnam puppetry has a firm foothold in international art market.

Vietnam National Puppetry Theatre is proud to have a contingent of talented artists, who are devoted to and continue the cause of their forerunners. Artists from the Vietnam National Puppetry Theatre not only have golden dexterous hands but also are very creative, talented, dynamic and sensitive in finding the key to the art of puppetry to develop the theatre’s brand in the market. Puppeteers from other countries can manipulate only one type of puppetry such as stick puppets or hand puppets etc. but Vietnamese puppeteers can perform different types of puppets such as water puppets, stick puppets, hand puppets, string puppets etc. Looking at the prizes won by the Vietnam National Puppetry Theatre from professional contests and festivals, and its number of shows per year which is often higher year by year, one can understand what factors that have made the Theatre success. The theatre has won many high prizes and awards for its art shows and artists including Award for Best World Art Program at the Czech Republic in 2002; Award for Most Attractive Program selected by the audience at the World Theatrical Festival in China in 2013; World Championship Award at the Harmony World Puppet Carnival in Thailand in 2014; Gold Medals at International Marionette Festival in 2008, 2010, 2015.

In recent years, Vietnam National Puppetry Theatre has offered its art shows on every week day, 365 days/year with 3 shows/ day. In addition to traditional puppetry art program that attracts regular audiences, marketing activities to tourists have helped the Theatre reach out to many foreign visitors, leading in the strategy to promote puppetry arts to international friends.

The number of shows offered domestically and internationally and high distinctions won at domestic and international professional marionette festivals in recent years have proven the enthusiasm, efforts, devotion, and creation of the staff and artists of the Vietnam National Puppetry Theatre, contributing to confirming the position of a leading puppetry art organization in Vietnam with high quality art programs and meeting the increasing demand of the public. 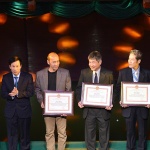 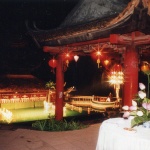